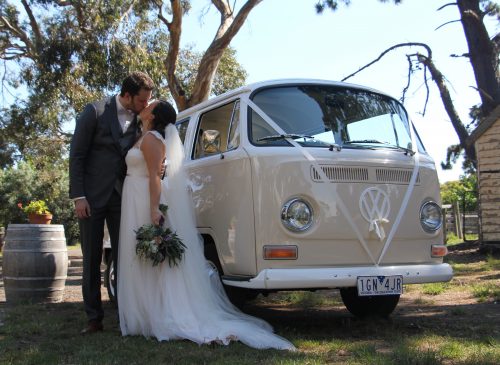 Mark and ‘Stormy’ had a great day recently getting to share in the wedding of another wonderful couple, the gorgeous Alisha and her very nice man Chris.  Much of my correspondence and planning for Alisha and Chris’s day was coordinated via Wedding/Event Planners, Cara and Takisha from chicbycara.com.au and they were both fantastic to deal with and I am sure that having them really helped to diminish any stress that Alisha and Chris might have felt both during the planning and also on their day.

It was not really far for ‘Stormy’ to travel, just over the bridge to Barwon Heads, to collect Chris and his mates.  Although it was raining in Geelong ‘Kombi Karma’ was there for Alisha and Chris as it was sunny with light winds on the Bellarine and indeed the weather was almost picture perfect.  Mark told me that Chris was a little nervous and appeared a bit uncomfortable in his suit however Mark being who he is managed to get the conversation rolling and after availing the boys a nice cold bear and some lollies and chockies it was all aboard for a nice relaxing drive out to the amazing, ‘The Barn’, in Wallington.

Leaving Chris in the capable hands of wedding coordinator Takisha, Mark and ‘Stormy’ headed back over to Barwon Heads to collect Alisha.  Mark was met at the front door by some of Alisha’s stunning Bridesmaids and her Dad and Mark said that they were very welcoming and really made him feel at home.  Mark waited outside and was blown away when he saw Alisha and he said that she was absolutely beautiful and radiant on her special day and delighted to see ‘Stormy’ for the first time.  After a few pics and availing the ladies with a nice cold beverage its was time to head off and get married.

Alisha was very calm and relaxed and indicated to Mark that she wanted to be on time for the ceremony as she did not want Chris to be worried or anxious at all, such a lovely and very nice lady.  I would also like to think that maybe Alisha was also really looking forward to marrying the love of her life and wanted to make it happen as soon as possible, again way cool.  Mark stopped a bit short of ‘The Barn’ for final ‘shoozing’ and to confirm that all was ready before Alisha said “lets do this” and off they went.

Mark parked ‘Stormy’ in the shade of the lovely gum trees and helped everyone to alight before handing everyone over to wedding coordinator Takisha for final instructions and then it was time for the big reveal to waiting family and friends, and more importantly to her man Chris.  What followed was a lovely ceremony that certainly highlighted the obvious love and affection that Alisha and Chris have for each other and Mark told me that there was indeed a huge cheer and applause when they were pronounced as Husband and Wife.

There were then lots of congratulations and hugs and kisses from family and friends before Mark was able to give his own blessings to the very happy couple and then get some lovely photos of them with ‘Stormy’.  Mark wished he could have spent more time with Alisha and Chris however their time-line for their day did not allow for this but he really did enjoy their day and told me when we caught up later that he is so appreciative and thankful that I asked him to come on-board my little Kombi Adventure and that he has absolutely loved every wedding that he has been involved in.  As I knew that he would.

Thank you so much Alisha and Chris for letting us share in your special day and we wish you much love, joy, health and happiness and of course continued great ‘Kombi Karma’ in your lives together. 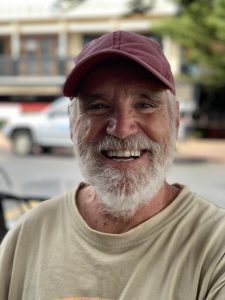